My COVID-19-self-isolation reading for the last few days has been a terrific new book by Terry Irving, The Fatal Lure of Politics.  It's the biography of a remarkable intellectual, Vere Gordon Childe, who's definitely one of my heroes. 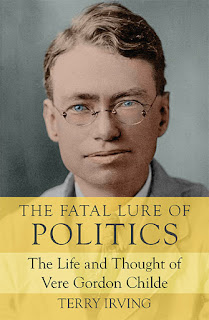 As a young man Childe was an anti-war activist and a radical in Australian labour politics. Ten years later he was professor of archaeology in Edinburgh and rapidly becoming the most influential prehistorian in the world. His pathbreaking synthesis The Dawn of European Civilization built an international reputation. His popular survey of world prehistory and classical civilization, What Happened in History, sold hundreds of thousands of copies. Childe's earlier critique of labour's amazing success and dramatic failure in Australia, How Labour Governs, was forgotten.

Both sides of Childe's life are remembered now, but they are usually treated as if they belonged to two different people. The new biography shows how intimately they connect. It's a dramatic and tangled story. (Among other things, this theorist of broken pots, Bronze-Age tools and ancient cities was under surveillance by spies and security police from Britain, Australia, the USA, and almost certainly the USSR too.) Terry Irving catches the complexity. It's a deeply researched, illuminating and emotionally moving biography. You can find it at: https://publishing.monash.edu/books/flp-9781925835748.html.

When leaving for long trips in the past, I've usually filled up a manila folder, labelled ON RETURN, with jobs I have to do after getting back. I'm starting to do the same thing for the self-isolation period. Deposit a cheque at the bank, replace the lost charger for my mobile phone, buy a new dish-brush, and so on.

But it won't be a question of waltzing out the door on Day 15 and finding everything the way it was two weeks or a month ago. Many of those businesses will be shut.  Like everyone else, I'll have to be extremely cautious about social distancing. The number of infections in the population is still going steeply up.

But beyond the list of short-term jobs, there's the issue of finding a way of life in an epidemic that's certainly going to last for months. I'm skeptical of media and publishers' rhetoric about "the X that changed the world" (fill in the X with your favorite catastrophe or technology or map). Our governments are doing their damnedest to make sure the world isn't changed by COVID-19. Look at all those bail-out packages going to corporations rather than to their workers.

Oppositions, social movements, democratic institutions, have depended on meeting, and that's now not possible in the familiar ways. Doing it online raises many problems: surveillance, unequal access, etc.  A lot of inventiveness will be needed.