Today is Day 14, and at 9 a.m. tomorrow I will feel that it's OK to leave self-isolation quarantine. I haven't had symptoms, I'll be fairly confident that I'm not a carrier of the coronavirus and so can't infect anyone.

But I certainly can be infected. The epidemic is still growing in Australia so the danger is actually greater than it was when I went into isolation. I'm in a high-risk group, and this virus does kill. So I'm going to step very carefully indeed while the epidemic lasts. As everyone else should do. No Kaffee-klatsches, no concerts, no court appearances, no cavorting on the bloody beach...

Keeping up morale has sometimes been difficult. An infestation of biting insects appeared in my house, and much as I hate insecticides (given what we are doing to the insect population of the world) I had to use them. The weather has been erratic here, and the news about the epidemic has got steadily worse. As I've said on other days, our ruling classes have been appalling in their incompetence and callousness.

It's still a hell of a lot easier trying to self-isolate in an established suburb of Sydney than in a settlement like the comunidades of Rio de Janeiro and São Paulo, or the Cape Flats and Soweto.  Or even New York. I can't see that the virus can be stopped now from spreading through most of the biggest cities of the world. There's a lot of trauma still to come.

I've been fortunate in social support. Family stocked my kitchen, friends and neighbours have brought fresh food to the door, colleagues and friends from as far away as Siberia have sent online encouragement. I'm very grateful to all of them, and to readers who have given me feedback about this blog and made me think it was really worth doing.

Advice to those starting isolation for COVID prevention? Hmm. Expect ups and downs: it won't be all grey monotone.  It takes a while to become consistent in following the prevention rules, e.g. handwashing and not touching your face, but keep working at it. Don't spend hours following COVID horror stories on social media - ten minutes is quite enough. Give yourself a few rules such as exercising at a certain time of day, but don't beat yourself up if you're slack about them. Above all, keep in touch with other people, every day. Do it by phone, by email, by skype, by facebook, by talking through the front door, by waving from the window, by sending smoke signals in Morse code. All these are valid.

And to wind up, COVID Reading. I've gone in for plenty of escapism, like essays about Elvis, and old comic books, and superannuated murder mysteries.  But one gets tired of that. So I've also looked at writing with more protein in it, and I want to finish by mentioning one of those books.

Svetlana Alexievich became famous for a book with an untranslatable title, Boys of Zinc or Zinky Boys or Boys in Zinc. It was a semi-fictionalized oral-history documentary exposing the grassroots experiences of the Soviet war in Afghanistan. Vox pop social realism has been done before - Studs Terkel's Division Street America and Working are fine examples - but Alexievich turned it into War and Peace.  A number of other books in the same style, dealing with topics like the Chernobyl disaster and women's experiences of war, made her very unpopular with the regime in Belarus, and won her the Nobel Prize for Literature in 2015.

The title Boys of Zinc was a reference to the zinc coffins in which dead Soviet soldiers were shipped back from Afghanistan, and also an ironic reference to the regime's heroic rhetoric about Soviet soldiers in WWII as "Men of Steel". To most people in the Anglosphere, WWII means the Battle of Britain and D-Day, with clean-cut democracies triumphing over Hitler through their innate goodness. (It's the Hollywood version, brilliantly taken apart in Paul Fussell's book Wartime.) In cold fact the Nazi regime was defeated by the Red Army and Stalin's dictatorship. It took four ghastly, grinding years of violence and devastation, leaving the Soviet Union with 25 to 30 million people dead. 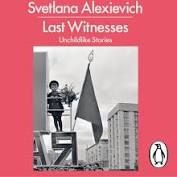 Not long before Boys of Zinc, in the 1980s, Alexievich published an unusual book of stories from WWII called Last Witnesses. It's just been translated, and I've been reading it. A few pages at a time, which is all that I can bear. It's a collection of memories by Soviet citizens who had been children during WWII. If you ever want to know what a major social catastrophe is like for the vulnerable and powerless, have a look at this.