If the war goes on

The long-rumoured report on Australian military atrocities in the Afghanistan war has just been released (and immediately kicked down the road by the national government). I have been thinking about why the Australian military were there in the first place.  It's a familiar story: "forward defence", stop-them-over-there, Defend Democracy, our government's need for some violence to scare the voters with, and the same government's habit of doing whatever the American government wants done... But then, why do we have wars anyway?

So I have been reading Hermann Hesse. If you know his work - it's not so popular these days - you have probably read his mystical parable Siddhartha, his surreal psychological novel Steppenwolf (which has the  best joke about classical music I have found in literature), or his very strange, rather plodding but also eerie academic fantasy The Glass Bead Game. But the best of his writing that I know is in some essays first collected in 1946 (the year he was given the Nobel Prize) under the title Krieg und Frieden - war and peace. 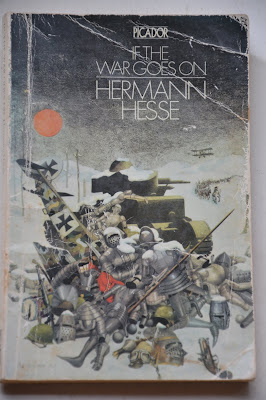 The English translation has a better title: If The War Goes On. I have a paperback edition from 1978, much battered. The book has a brilliant cover illustration showing a heap of armour and war machines, from mediaeval to WWII, abandoned in the snow, and in the background a WWI biplane flying over Napoleon's retreat from Moscow.

In the first, Hesse goes away on an astral trip for two years, and comes back to find the war still running. Now nothing matters but the war, which has mutated into random mass bombing from balloons. (Seems like a premonition of the vast destruction of German and Japanese cities, not to mention Stalingrad, from the air In WWII.)

In the story, the author goes for a walk and is arrested because he doesn't have an official permit to take a walk. He enters a Kafka-esque world (think The Trial or The Castle) of incomprehensible bureaucracy, finding he is in breach of multiple regulations, worst of all he doesn't have a legal permit to exist... Finally he is sent to the top official, who explains that all the regulations have a reason: they are to preserve and safeguard the war.

'Yes,' I said slowly, 'you've got something there. The war, in other words, is a treasure that must be preserved at any cost.' But why? The official explains again: 'Only one answer is possible: the war is all we have left!'

The second piece, in the form of an imaginary newspaper report from the future, is shorter though the irony is just as fierce. (Now I'm reminded of Heinrich Böll's short novel End of a Mission.) By 1925 the regime is culling the elderly, in a programme for the 'elimination of citizens demonstrably unfit for public service'. (Premonition again?) Police action against one citizen who resists this programme leads to the discovery of his son, who is a philosopher and poet working away quietly in a secluded home. This son is a phenomenon: the only European who has never heard about the war. When cross-examined by the authorities, he thinks their stories about current events are fictions designed to test his mental condition. The newspaper reports that the University may decide to acquire him as the unique surviving case of an extinct species. "This 'pre-war man' will be subjected to thorough investigation and perhaps preserved for science."

War is a treasure, all we have left - and anyone outside its logic is a bizarre exception - still? There might be something in it. Given all those war movies and airport thrillers (not spy stories so much as secret-police stories), our mass media full of combat-style sports, the breathless reports by correspondents from the latest front, the gun lobby and the international arms trade. Not to mention the actual fighting. There seems to be a case that the war did, indeed, go on...